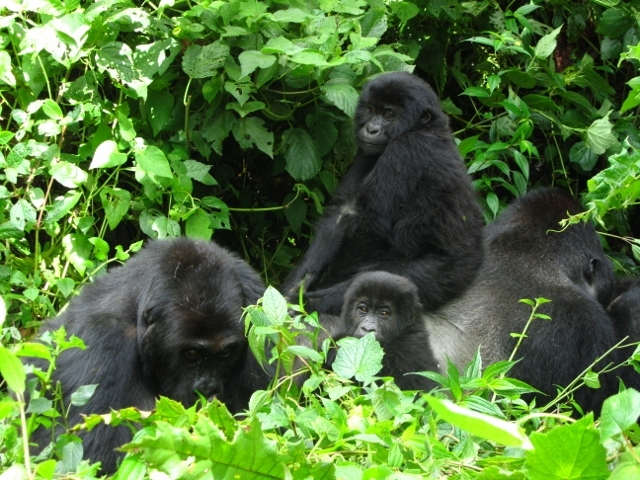 Gorillas are a unique creature which everyone would wish to visit but there are rarely seen and mostly found in western, Eastern and central part of Africa.

Gorillas are grouped to be ground dwelling apes which are herbivorous in nature feeding on stem, foliage, shoot mostly young bamboo, tree leaves and some fruits.

Gorillas usually live in group named “Troop” which comprises of both female and male members and always led by the old dominant silver back, they usually live in temporary small huts constructed out of tree branches, leaves and more.

Very interested in seeing the shy endangered Lowland Gorillas here is the only destination in Africa where you can find these species. Democratic Republic of Congo in Central part of the African Continent is where these Lowland Gorillas are residents.

Democratic Republic of Congo is one of the biggest destinations located in the Central part of the African continent bordering Uganda, Rwanda, Burundi and Tanzania in the East, Central African Republic and South Sudan in the North.

In the past this country was known to be with high rate of insecurities caused by rebels but this was resolved by the government of Democratic Republic of Congo and other international peace keeping organizations like United Nations, it is currently more stable and secure hence boosting high rates of Tourism.

As Democratic Republic of Congo’s air transport systems are not in existence you can better access it by landing in Rwanda at Kigali airport and transfer to up to Goma border where you will cross from after clearing with officials at the border but it requires you to apply for Congo visa in advance before you’re traveling dates because it is processed within one week, this visa is a major requirement when you reach borders.

From border you will be transferred by the Virunga Safari jeeps up to your hotel of residence, mostly it’s advised you arrange your safari to Congo with a local tour operator like Eco Tours Uganda as there are more informed and they will help you in booking all this safari logistics which include Visa, accommodation and all transportation with Virunga.

Where to find Lowland Gorillas in Democratic Republic of Congo?

Lowland Gorillas are very big and huge when compared to the mountain gorillas, brownish in color with black mouth and tailess; these apes feed on young bamboo shoot, stem, foliage, leaves and some fruits.

They use temporary small huts constructed out of tree branches and leaves for shelter, gorillas live in groups named “Troops” which are always led by the dominant male Silver backs.

Reaching Kahuzi Biega National Park is via Bukavu and activity done is Lowland gorilla trekking safari which involves visiting the jungle in search of these Lowland Gorillas (after a briefing from the park officials about the dos and don’ts while in the presence of these apes) very excited to see them feeding, playing with young ones, laughing and taking photos of them for memories.

You are assigned a park ranger to lead you through the jungle when trekking, after discovering location of these apes in the jungle you are allowed to stay in their presence for only one hour and after that session you vacate the place to give room to these apes such that they can continue with their day to day work.

For an amazing and discoverable Lowland gorilla trekking safari in Africa do not miss out visiting Democratic Republic of Congo which is strategically located in the Central part of the African Continent.

We wanted to share a quick message, to send a huge thank you to everyone who has donated to this year's marathon campaig...
Are you passionate about wildlife in Africa? If you enjoy travel, wildlife and photography, this might be the career for you. As the name implies, wildlife photographers capture photographs and videos of wild animals. Mountain gorilla trekking safaris has become sought after among adventurers and...