Welcome to Bukima tented camp, which is the main starting point Virunga mountain gorilla treks. The camp was originally built for researchers, but is now used primarily by trekkers. As the name suggests, overnight guests at Bukima sleep in platform tents, but by camping standards they are quite plush and self contained with shower and toilets en-suite.

Each tent features an adjoining bathroom with running water and a nicely appointed bed and dresser for clothes. The views from the tent sites – or anywhere in camp for that matter – are spectacular. To the south, the view is dominated by Mt. Mikeno, whose 4437m (14,560’) summit towers over the gorilla sector.

Across the valley is Nyiragongo volcano, whose lava lake colours the night sky with a red glow. Every few years, Nyamulagira volcano erupts and steals the night time show by spewing hot lava hundreds of feet into the air. Occasionally, the mountain gorillas themselves wander into the Bukima tented camp. Although this is highly frowned upon by park staff, it never ceases to impress the guests.

Prices for the camp include breakfast, lunch, and dinner. Alcoholic beverages are available for an additional charge. Of the six tents, four feature double beds and two are outfitted with twin beds. 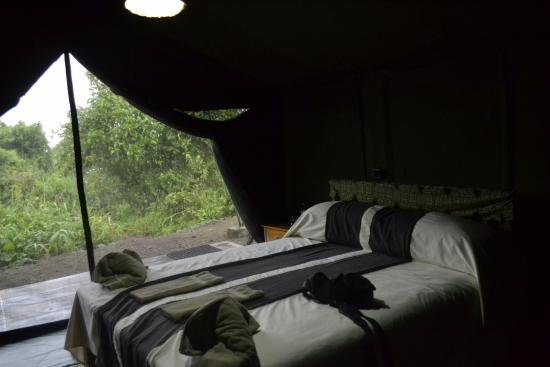