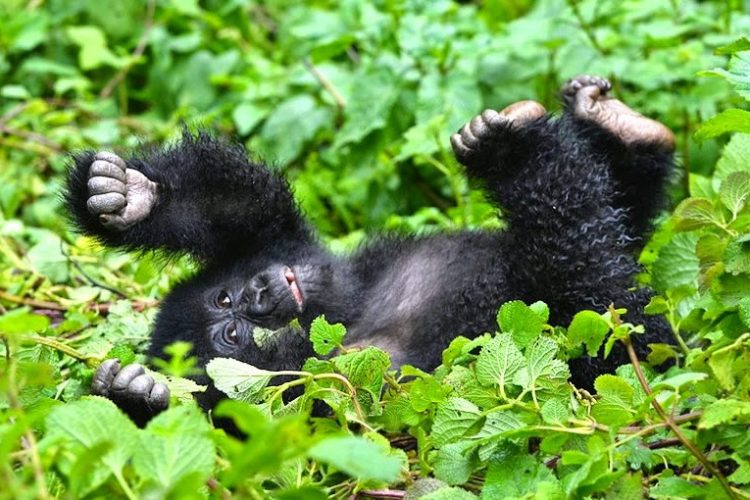 Nature Adventure Uganda is all about incredible gorilla tour and wildlife adventures.

We plan, organize and implement bespoke gorilla safaris to Uganda, Rwanda and Congo all designed to meet our clients’ travel expectations.

Also, we are a one stop shop for exceptional gorilla tours and wildlife safaris in East Africa offering memorable affordable holiday packages which leave our price sensitive travelers happy to travel with us again and again.

It offers the most incredible and affordable gorilla trekking safaris in east and central Africa. Our professional driver guides guarantee travelers safe and comfortable transport to all tourism spots all over Africa.

Visit the prime gorilla tour and wildlife safari destinations in different corners of Uganda after which Sir Winston Churchill referred to Uganda as the Pearl of Africa.

No comprehensive description can explain the natural beauty of Uganda. Meeting face to face with the critically endangered mountain gorillas on your gorilla safari in the tropical rain forests of Bwindi and Mgahinga in south western Uganda.

Any Rwanda safari without gorilla trekking in volcanoes national park is undeniably incomplete. Fortunately, Rwanda the land of a thousand hills offer travelers with a less physically demanding and accessible gorilla safari holiday in east and central Africa.

Small green mountainous rolling into infinity offer visitors with beautiful sceneries on their journeys to enjoy gorilla treks in the jungles of Volcanoes national park in the north eastern province of Rwanda.

Gorilla trekking in Congo is relatively cheap compared to Uganda at 600usd and Rwanda at 1500usd. A single gorilla permit in Congo costs 400usd for an hour’s interaction which makes Congo a best gorilla tour destination for budget traveler. 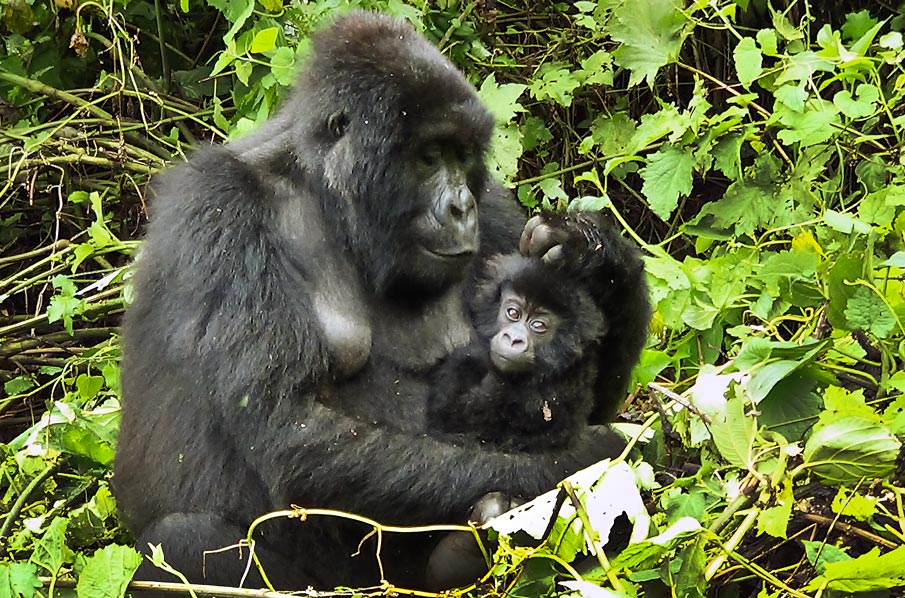 Established in 1925 and inscribed as an IUCN World Heritage Site in 1979, Virunga National Park is one of Africa’s most bio-diverse conservation areas that run more than 300km along the border with Rwanda and Uganda. It protects the entire Congolese portion of the Virunga Volcanoes, Rwenzori Mountains and Lake Edward, and habitat range encompassing glacial peaks, Afro-montane moorland, high-altitude forest, lowland rain forest and open savannah.

Virunga is Africa’s richest protected area in terms of avian diversity with an astonishing 706 bird species recorded more than in the whole of Rwanda, including several Congolese or Albertine Rift Endemics. A checklist of 208 mammal species contains 23 primates including mountain gorillas, eastern lowland gorillas, and common chimpanzee along with Congolese endemics such as the bizarre Okapi a striped, horse-sized relative of the giraffe and typical savannah dwellers such as lion, elephant and buffalo.

The Nyiragongo Volcano hike is one of the popular activities in Virunga National Park whose perfect cone rises above Goma and the Lake Kivu shore to an altitude of 3468m. One of Africa’s most active volcanoes, Nyiragongo was responsible for the massive killer lava flows that devastated Goma in 2002, and the hike to the top passes the subsidiary cone formed by this most recent eruption. At the top, sheer windswept cliffs plummet into nested main crater, which is at least 600m deep and has average diameters of 1,2m.

At the heart of immense natural cauldron, a circular lake of live lava bubbles away like a massive casserole, its surface pattern ceaselessly mutating as blackened crusts of magma collide, crumble and melt, spewing bright red flumes of molten tens of metres into the air.

The standard trip runs overnight, sleeping in one of the huts on the rim which is highly recommended as the view of the lava lake is most spectacular at dusk and after dark. Hikers should come with food, remember there are no cooking facilities at the top, and should bank arrange packed meals or book for a Mikeno Package at only $80 that caters for everything. It can be very cold and windy at the top, so a sleeping bag is also necessary, as is a good rain jacket, hiking boots or sturdy walking shoes, plenty of warm clothes including gloves and a change of clothes in case of rain. A torch and spare batteries are also essential.

The hike starts at Kibati Ranger Camp about 15km from Goma on the west side of the main road of Rumangabo, Mikeno Lodge and Bukima, and the hike departs at 10:00am sharp. It is only 6.3km from here to the rim, but it is a steep climb, starting at an altitude of 2,000m and gaining more than 1,400m and the ascent takes around 4-6 hours’ depending less on your individual fitness than on the overall fitness of the party, all hikers on any given day are expected to stick together for security reasons.

The first 2.5km hike from Kibati takes around 40 minutes, easy underfoot through an area of montane forest, the second hike is steeper but 20-30 minutes ascent of the scree-strewn south-eastern slope of the dormant subsidiary cone created by the 2002 eruption. From here it is slightly less than 1km to the third hike a 20-30 minute ascent along an old lava flow to the base of the main cone. The toughest leg follows gaining almost a 60-70 minute hike that brings you to hike four, site of a ruinous old mountain hut.

From post four, the breathlessly steep scramble up the final 400m of loose rocks leading to the crater rim and cabana site should take 20-30 minutes. Up to 16 overnight volcano permits are issued daily corresponding to the number of beds in the eight double huts at the rim.

Porters can be hired for $24 overnight trip to carry up to 15kg of luggage each. In addition, you will need to pay for transport to and from Kibati, which can be arranged through the park website. Nyiragongo volcano permit costs $300 per person.

Virunga National Park offers a mountain gorilla safari experience comparable in quality and in most respects to that of neighbouring Rwanda and Uganda. Six gorilla groups are habituated to tourist’s visits, with six permits being issued daily for larger groups, and four for smaller groups, creating a total availability of 30 permits daily. Trekking apply to four groups that are normally tracked from Bukima which lies on the slopes of Mount Mikeno about 90 minutes’ drive from Mikeno Lodge and twice that distance from Goma.

Set a few dozen kilometres to the north-west of Rumangabo, Tongo is a 19km block of medium altitude forest isolated from other similar habitats by lava flows. Traversed by an 80km network of walking trails, Tongo is home to a community of around 35 chimpanzees first habituated by the Frankfurt Zoologist Society (FZS) and opened to tourism in the late1980’s only to close again in 1993 because of instability. The (FZS) re-launched the Tongo habituation programme in 2010, but it was once again shuttered because of fighting in the area in 2012.

The habituation team at Tongo re-opened once again working with the chimps on a daily basis. Guests staying at Mikeno Lodge can join this team on their daily visits to the chimpanzees. The day begins when a group of local trackers leave their camp at 4:30 am to locate where the chimpanzees spent the previous night. Lodge guests set out at 6:00 am to find the chimpanzees. Groups are limited to 4 people and time with the chimpanzees is restricted to one hour. Note: that the chimps at Rumangabo will occasionally migrate in and out of tracking range, so visits are sometimes cancelled because of the chimps’ movements.

In the far north of the park, the Congolese portion of the Rwenzori Mountains is technically open to tourists, though far less accessible than the Uganda side. From the Congo, road travel between Goma and the north of the park was considered unsafe at the time of writing, so the Ruwenzori’s are usually accessed via flights to the town of Beni or via Uganda border crossing at Kasindi.  A five nights/ six day circuit including a summit of Margherita Peak from the Congolese side can be arranged here, but hikers and climbers must be fully self-sufficient in terms of all food and gear.

Uganda forms part of the greatest must be visited countries in the African Continent, starting from is weather and climates, physical and non-physical features plus the enormous herds of wildlife found in its different national park. The country is located in east Africa and therefore land locked; visiting the Pearl of Africa for gorilla safaris is the best choice you will make forever since it leads other country in gorilla tourism with the greatest numbers of endangered mountain gorillas. However, gorilla can also be trekked from DR. Congo where both Mountain gorillas and Lowland gorillas can be found in the African continent.

Gorillas in Uganda are tracked are tracked form the only two national parks found in the south western parts of the country in the gorilla favorable conditions, Bwindi Impenetrable National Park is one of the best destinations for tracking.  Mountain gorillas in Uganda, the park has got fourteen Gorilla groups distributed in its four segmented sectors of Buhoma, Ruhija, Rushaga and Nkuringo. Visitors are assigned gorillas depending on their bookings and how physical one is since some groups are found in far places that require trekking up to the hills via the designated trails of rocks and stones.

Visitors can either take up a trekking activity whereby a permit goes for $600 or Gorilla habituation activity which costs $1500 per person per day and the difference between these activities is the time spent while with the gorillas. Trekkers start the activity early in the morning since gorillas are mobile, they keep on moving in search for food and therefore they build up their nests in different places though the activity is too interesting to the many, this is because visitors are given park rangers who escort them and give them guidance throughout the activity.

Also, Mgahinga Gorilla National Park is another gorilla trekking destination in Uganda, this is where another gorilla group known as the Nyakagezi gorilla group is found. This park is loved by the majority tourists because of its magnificent wonders, gorilla tracking here becomes too interesting since visitors follow designated paths and therefore rangers lead all the groups. The place is secure; this gives a chance to the tourists to view the three volcanic cones of hills that are situated around the Virunga ranges. These are the Gahinga, Sabyinyo and Muhavura mountains.

Kahuzi-Biega national park, this park found in the western banks of Lake Kivu, the two hills within the park including Mount Kahuzi and Mount Biega gave birth to the park’s name and it is one of the largest national parks in the country. Here trekkers trek into the tropical rain forest and all visitors are required to use one hour with the gorillas after seeing them. This is an interesting activity done by almost every tourist who wishes to do double gorilla trekking in Congo and this also enables visitors to compare both the lowland gorillas and the Mountain gorillas in their jungle.